I was very chuffed to spot my gorse.ie review of Iosi Havilio's Paradises on the author's own blog. Here's the Spanish edition with an exotic cover. I like the & Other Stories cover a lot, though.

View ReView Unknown at 05:50 No comments:

Declan Kiberd on Joyce's The Dead 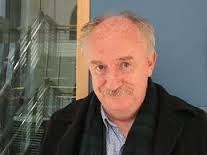 I know Professor Kiberd only from his books, and the two I've read, Ulysses and Us and Inventing Ireland, were reasons enough to go along to his talk at the James Joyce Centre last night, Nollaig na mBan (Women's Christmas). That it was free, and held in the lovely Georgian house that is home to the Centre, were added bonuses. We were an intimate group (and an eccentric one, but that's a story for another post), so I'll try and give some highlights for those who didn't make it. Fortunately, I believe the talk was recorded for YouTube, so my errors and omissions will be correctable in due course.

More technology: the UCD app for The Dead, which can be downloaded for free, was launched yesterday too. Kiberd noted that as a keen user of technology, Joyce would have approved. And one more non-paper version of The Dead, which was recommended several times during the evening, and which I recommend heartily too, is John Huston's 1987 eponymous film, starring Donal McCann and Anjelica Huston.

Kiberd has the sort of eclectic brain and articulate delivery that makes me wish he hadn't left UCD (for Notre Dame). He can shift from The Dead to The Commitments to Gulliver's Travels and back with a virtuosity that would put Lang Lang to shame. So where to start?

Maybe with this: artists can be media for forces more powerful than any one person can be - offered as an explanation for the extraordinary maturity of the stories that make up Dubliners from an artist so young and who, outside his writing, was making a complete hames of his life.

Kiberd regretted that Dubliners is so often viewed as Joyce's apprentice work. Even Yeats, who should have known better, said it 'contained promise of a novelist of a new kind.' Kiberd opined that the short story is a form suited to a society still unmade, whereas the novel contains the layers of a fully made society, but that all of Joyce's so-called novels (Portrait, Ulysses, the Wake) were forms of emergency that were still not novels. [You have to love someone who can confidently use 'emergency' this way.] He felt that generic definitions 'congealed around Joyce' when Joyce's project was the reverse, to effect an escape from the constriction of genre. His desperate characters who want to move but can't, reflect Joyce's dream of expressing freedom as a writer. He wanted to escape the constraints of the short story and novel forms; he wanted to produce something very new.

Dubliners is neither short stories nor a novel. [I hadn't heard before Kiberd's theory that the individual stories in Dubliners and Ulysses are parodies of the great European novels: that The Two Gallants are Don Quixote and Sancho Panza, and Mrs Sinico in A Painful Case is Anna Karenina, both struck by a train.] These European novels follow a growth, or developmental model, which was challenged by writers like William Carleton, Maria Edgeworth, Beckett, and Joyce who wrote instead 'shards and patches'. Kiberd felt that Joyce was indebted to Maria Edgeworth, pointing out that both were committed to the same thing - the decline of a community. As Edgeworth does in Castle Rackrent and Joyce in Dubliners, Both show public decline from private examples and, like Dubliners, Castle Rackrent is neither short stories nor novel, but something in the interstices between the two, some form of emergency [there it is again].

We will have a name for the form, Kiberd joked, in about three hundred years time. 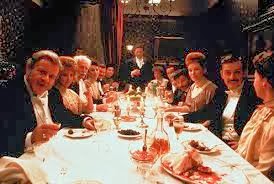 'Novel-in-stories', anyone, I didn't dare ask, for fear of congealing Joyce, and who would want that on their conscience?

Kiberd's description of The Dead as 'a series of women punctuating Gabriel's self-esteem', and his prominent references to Maria Edgeworth, Edna O'Brien, Claire Keegan and Eilis Ni Dhuibhne over the course of his talk, offered more than a nod to Nollaig na mBan.
View ReView Unknown at 14:07 No comments: