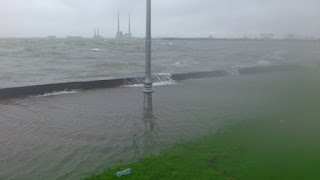 Coming soon in Necessary Fiction, my review of Lane Ashfeldt's short story collection, SaltWater.  All thanks to my posting this photo of Clontarf at high tide on twitter. I suppose that's what makes it an international computer network...
View ReView Unknown at 01:44 2 comments:


For their 21st edition, ROPES Galway 2013 is themed Coming of Age, and they're including my story Angel-headed Hipsters. All proceeds of the magazine will go to the charity Jigsaw, a support service for young people in Galway. The (other) best bit is, it will be launched at the Cúirt International Festival of Literature in April.

My fondest memories of Galway involve this pin-up, the Naomh Éanna, who delivered generations of pubescents, myself included, across to Inisheer and into the hands of our Bean an Tís (apologies to gaelgóirs; my Irish is as rusty as the old lady herself). Dour fishermen lifted us and our rucksacks into currachs for the last stretch of the journey, then retrieved us, newly fluent (ahem...), three weeks later, and brought us back to Galway.

A couple of years ago, I needed a used wet-suit, and the address led me to a surf shop housed in none other than the lovely Naomh Éanna, where she is now docked in Ringsend, Dublin. I think I can feel a story coming on...

I haven't been back often enough since. Thanks ROPES for an excuse for a road-trip!
View ReView Unknown at 08:15 1 comment: