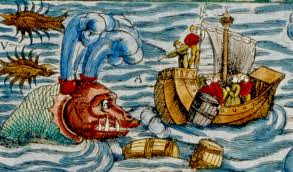 At the risk of repeating what many a blogger has mused before me, it's a year since I started ViewReview and muse I must.

There's quite a resistance among a certain generation to 'putting themselves out there' on the internet. The internet is where dragons lie, after all. We're more used to privacy. If we went to see a film, usually it ended when the credits rolled, not on Facebook and Twitter the next day. What I'm saying is, it was a Giant Step to decide to start blogging (and tweeting).

I started because there was a certain amount of pressure from other writers, online and in the flesh, to 'put myself out there', to 'get a profile'. And because one of the publishers I wanted to send my novel to said it was important. And because I felt guilty about skulking around other people's blogs anonymously. Mostly, it's been a good idea.

I've had over 7,000 page views thus far. Some of them were dodgy, from places that I'm certain are not interested in my writer-dipping-a-toe posts, places where English isn't generally spoken. But increasingly the views come from real readers only (you!), even garnering responses on occasion, and that's gratifying. What does a writer want, after all, if not readers?

There are days when I realise I haven't blogged in weeks because I've had nothing to say, but felt I had to say something anyway (sorry about that). There have been hours put into posts, instead of into my work-in-progress, or housework or something, which I'm fairly sure no one read. But at those times I think of something @LiamH2009 said about blogging (and I paraphrase from memory with apologies in advance), that he blogs for the same reason Irish navvies used to dig on a Sunday to keep their muscles from seizing up. It's all practice.

Even the tweets. Twitter is often distracting, often pointless, often a total waste of time. But it has also pointed me to great books I might not otherwise have heard of, and events, and I've met some great folks there, some of whom I've subsequently met in the flesh.

'Being solitary is a sick way to behave,'  was Patrick McCabe's opening when asked by Kevin Barry about his move towards writing for stage.

McCabe went on to express concern about who he was doing all the work for. Where was the audience gone? 'Grand Theft Auto,' replied Julian Gough. And we were off.

The printed word is on borrowed time, said Julian Gough, clarifying that he meant the book, not the word. The novel is not obsolete, it's just shape-shifting. Nowadays, writers can write for Breaking Bad. Like the 70's, Patrick McCabe agreed, when people didn't know how to write for tv so they experimented. He worried that the novel might become a strictly academic pursuit, a bourgeois activity.

To Gough, 'computer games' can be anything. You can code any text, combine sound/image/etc. 'It's completely up for grabs.' In this context, he says, the novel is a limited game adventure with no choices. His point was that there are lots of ways of telling stories.

Patrick McCabe pointed out that these did not replace the experience of reading a Banville or a Nabokov, or Yeats' The Second Coming, or any great stylist. But, Gough replied, it's coming to the point where it's inorganic to write a Lolita now, that it's almost retro. 'What about poetry?' McCabe asked. 'It's outside the market,' was Gough's reply.

McCabe opined that the 'cult of prize-giving' was an unfortunate development, wondering what it said about the people who didn't win. Gough agreed. Prizes were meant to draw attention to the novels winning them, but they became an excuse not to pay attention to anything outside the competition, making it difficult to make a living from writing. Kevin Barry said that he says no to absolutely nothing. All three agreed that there was no golden age when things were different, that writing has always been a vow of poverty.

The discussion returned to the future of the novel, if it had one. We, the audience, worried. We wanted to know. 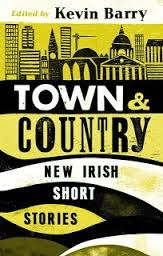 The technology (for printing 250-300 page books) is over, Gough declared in response to an audience question on the length of novels such as The Testament of Mary and Chesil Beach. The novel's time is past, and now it will disintegrate. But at least it liberated writers to be able to write exactly the length they want.

The heckler in the back of the room could take no more morbidity. Declan Meade, from the coal face that is The Stinging Fly, argued that the situation was not as bleak as Gough painted it, that in Ireland the situation was currently very healthy.

McCabe warned that we should not forget the notion of the artist, that we don't write just to sell books but to make sense of the world. For McCabe, writing is 'like breathing. I couldn't negotiate the world without it.'

The three writers were grouped together in the festival for their shared dark humour (I presume), and the readings from McCabe and Gough, from their stories in Town And Country, were very, very funny. Barry traced his literary lineage back through McCabe and Flann O'Brien to Laurence Sterne.

McCabe talked about how Free State Ireland was prized, above all, for 'the long, grave face'. 'Then along came Borstal Boy.' He told an anecdote about Brendan Behan stealing a Procession to Mary placard from the Blue Army of Our Lady and shouting 'Up Hell! Down with Heaven!' For McCabe, the appearance of Borstal Boy and The Gingerman in that climate were 'like grenades going off.' He told us that, having already written 'the long, grave face' novels' where characters said things like: 'I'm home to bury the brother,' it was time to try something else. 'Time to get a tab of acid,' someone quipped.

It was wonderful to be there, in a roomful of people who truly, deeply care about writing, and many thanks to the panel, and to all the panels in the Festival, and to Jennifer Matthews and all those who organised it.

Barry tried to wrap up 'so we can go home to our tea', but in the end, we had to be thrown out.

P.S. The Butcher Boy disturbed me in ways that I'm still counting, and as we left the beautiful Triskel Christchurch I was delighted to have the opportunity to tell Patrick McCabe just how much. I think he was pleased...
View ReView Unknown at 08:41 4 comments: 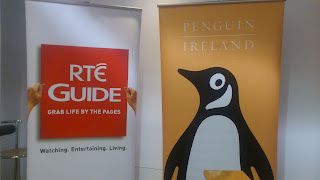 As promised, some nuggets gleaned from a very full and very enjoyable day... 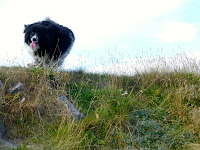 There was much, much more, positive and cautionary, but I'll save it for another post.
View ReView Unknown at 04:10 No comments:

Blog About Your Dog

Those of us used to entering writing competitions are also used to having our entry met with complete silence, finding out that we didn't win (again) only by accident or deduction. Not so the Penguin Ireland/RTE Guide short story competition which, in an altruistic gesture towards The Literature Project, offered a writing and publishing day for all those who made the longlist. [You can read the great winning story, Soft Rain, by Trisha McKinney here]

I was lucky enough to be there, and it was a jam-packed day, with talks from Jane Alger of Dublin UNESCO City of Literature, Patricia Deevy of Penguin Ireland, three Penguin authors (Sinead Moriarty, Niamh Boyce and Mary Grehan), Faith O'Grady (agent), Rachel Pierce (editor), Cliona Lewis (Penguin Publicity Director) and Donal O'Donoghue from the RTE Guide and Stephen Boylan, Easons Book Buyer. I took pages of notes, and I hope to plunder them in due course and share the gems with readers of this blog.

Meantime, as many of the speakers touched on social media and the effective use of same, I thought I'd follow up on one tip right away and blog a picture my dog!
View ReView Unknown at 03:30 5 comments: