Delighted to see my story, Auslanders, in The Ofi Press Literary Magazine, Issue 22, October 2012 (a fine magazine, with a great interview with George Szirtes in this issue). 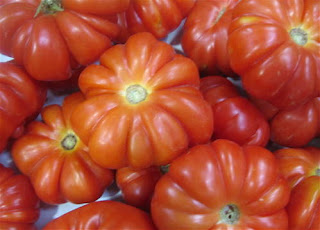 He sees them approach from North Clark out of the corner of his eye, another couple, another state-of-the-art stroller. Lincoln Park is full of them. Chicagoans, mindful that brown slush and six-foot drifts are never far behind and never too far away, embrace the Summer. These two are not enjoying themselves though. He can see by the way she is holding her arms across her chest, and the way he is determinedly pushing the stroller towards his Farm Fresh stall, not looking left or right.

- That's eighteen dollars to you. Enjoy. Yes Sir, give it a try and taste the difference for yourself. All organic. No pesticides, no artificial fertilizers. Mother Nature the way she should be. Thank you sir. And your change. Can I help you, Ma'am?
He reminds himself of the snake-oil man with his fast talk and quick sales

Thoughts on The Preparation of the Novel by Roland Barthes 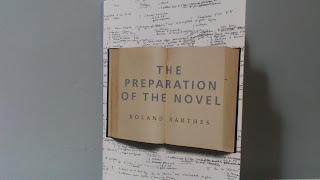 The haiku, Barthes says, is the short form which best represents the present. It is tangible, particular. It creates the effect of the real, which he explains: 'language fading into the background, to be supplanted by a certainty of reality: language turning in on itself, burying itself and disappearing, leaving bare what it says.'

The titular Preparation of the Novel is a transcription of two series of lectures (1978-80), which Barthes completed just weeks before his death. It's a difficult read, with multiple allusions and covering many fields of knowledge and, despite Barthes' caution to his audience not to underestimate what the layout of speech on the page can do, the pages of this book are peppered with off-putting symbols and endless parentheses. However, his oratorial style- confident, bordering on arrogant, but also self-disparaging and funny, and the poignancy of his death- he was knocked down by a van outside the college and died a few weeks after the course ended, together with the fascinating questions he posits, make this book compelling.

Barthes forces his audience/reader/the would-be writer to think, and to think specifics. Finding the right word; putting the words in the right order, taking into account sound and syntax; creating rhythm within the sentence and within the paragraph; ordering paragraphs; ordering chapters, creating rhythm within the work as a whole: these are our concerns, because we want to create the effect of the real, at least those of us who are writing realist fiction. The job of the writer is to weave words so, like fine cloth, the work, the craft, the word itself, becomes invisible, leaving only the effect. Haiku, for Barthes, 'sets a bell ringing': the effect has been created.

The Haiku, Barthes contends, outwits the desire to interpret, whereas a story has causalities, consequences. A haiku is like a photograph, but without the excess of meaning a photograph contains. The writer is forced to be selective: what we choose to take from reality in order to give the effect of the real. Language, like the world, can be divided indefinitely, but it is a question of what point one decides to set it down.

To move from haiku to narration, since haiku is impossible to extend, Barthes looks to epiphanies, 'the sudden revelation of the quiddity of a thing', and to Joyce's Stephen Hero, as a linked chain of moments. This prompts him to consider the possibility of studying a work starting with its moments of truth, which in turn forces the reader-writer to consider her own novel in the same way.

Barthes (and his reader) wonders where the desire to write comes from; it comes from the pleasure of reading. But then he wonders who the readers are who don't write. He does not speculate, instead leaving us to reflect on what makes a creative person, a person creative: material for another course of lectures, at the very least.

Much of the second series focuses on finding time to write, or the life of the author, and Barthes considers seeming insignificant issues such as solitude, secrecy, schedules, regimes of food and sleep, whether or not to read while writing, and so on. I found it less interesting than the first series, perhaps in part because it is speculative, since Barthes has not yet begun writing his novel. He wonders: 'how to get out of this situation?' (of having a few notes, fragments plus the fantasy of the work), and answers: 'I've no idea because it's the state I was in on the day I drafted this course.' However, I did note that the methodical life of the writer seems to refer exclusively to the male writer, and that there is not a child in sight.

Barthes' undertaking these lectures was both generous and brave; most writers do not dare to poke too much at the elusive and easily frightened animal that is the realm of ideas and inspiration. Whether he sabotaged his own novel, Vita Nova, in the process, we do not find out. Eight pages, reproduced in the book, are all there is of it. However, at the end of his course he does admit: 'It's not even clear to me... that I'll write anything else... Because the bereavement (the death of his mother) I evoked two years ago, at the beginning of this Course, has profoundly and obscurely altered my desire for the world.'
View ReView Unknown at 07:23 1 comment:

In Defence Of Quiet Writing


Is there anybody out there who does not need bloodshed in the first paragraph, a body in the second, and a threat to national security if not an outright national disaster before the end of chapter one? There is an argument that new media has shortened our attention span, that we need to be excited constantly, and hence the success of Facebook and Twitter. Even old-fashioned email delivers up new developments in our personal and professional lives twenty-four hours a day, should we wish to check it.

Is this not all the more reason why we should also carve out a reflective space for ourselves, slow ourselves down? Is it not a case for understated prose which explores subtleties of character, which insists on being read slowly and reflected upon, which does not pander to the impatience that fractured modern living engenders (the kind I like to read)? Yet, agents and publishers, albeit with regret, tend to pass on novels they deem 'too quiet' for the market.

Genres that are loud and fast are an easier sell. After all, our lifestyle has us already primed to want them. They lend themselves to the soundbite, the text, the tweet. And they deliver. Car-chases, corpses, and multiple-copulations sell by the truckload. But what about William Trevor, Alice Munro, Anne Tyler? Is the publishing industry telling us that writers like these, in whose books the copulations and corpses do not insist on declaring themselves on the first page, are dinosaurs, past their sell-by date? And that once they are extinct, they will not be replaced?

Is the drama of being human simply not profitable enough any more?
View ReView Unknown at 01:07 2 comments:


Reading one's own composition for the first time is scary, but the thirty or so other eight year olds were a forgiving audience. At fourteen, reading a story for the Year Of The Disabled competition was nerve-wracking but, as it had won a prize, it was also elating. Fast forward many years later to the Irish Writers' Centre, and Conor Kostick's Finish Your Novel course, where participants all read their work before it is critiqued by the group; this act of putting one's best, grown-up efforts before a group of committed peers, was terrifying.

Writers are notoriously insecure, and it doesn't take much to wound their fragile self-esteem. Witness desperate attempts to explain why the group doesn't get what they are trying to say, all the while conscious that, as Ronald Reagan famously said, if you're explaining, you're losing; the work has to speak for itself. This fear of being judged is often what prevents fledgling writers from finishing... anything. 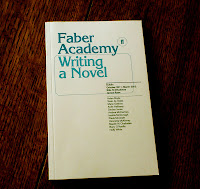 Whether from finished pieces or work still in progress, eleven brave souls bared all – some more than others, not mentioning any names, Maebh – at the Faber Reading last night in the fabulously retro Vintage Rooms in the Workman's Club on Wellington Quay. Eloquently introduced by Eilís Ní Dhuibhne, we were the Dublin Faber Write A Novel class of 2012, and the purpose of the evening was the launch of our Anthology http://www.amazon.com/Writing-Novel-An-Anthology-ebook/dp/B00969YJTE

We read for agents, our teachers, our peers, and each other. But we also read for ourselves, because standing up in front of an audience and reading one's own piece of creative writing aloud is an affirmation of belief in the work, allowing it to speak for itself. And, if I may modestly say, it - the writing - acquitted itself very well.