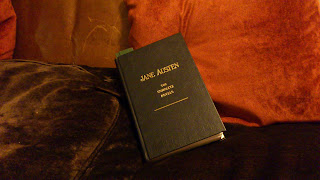 I'm under instruction to read Northanger Abbey, Sense and Sensibility, and Pride and Prejudice. And to read them slowly. Whether a reread of the novels (especially a re-read of the novels) or a frivolous couple of hours watching any of the period dramas, or even Clueless or Bridget Jones's Diary, it is alway a pleasure to return to Jane Austen. Get cosy, open the cover, read:

'It is a truth universally acknowledged, that a single man in possession of a good fortune must be in want of a wife,' and you are transported back in time, through your teen or pre-teenage years and your first encounter with Austen, all the way to Regency England.

In novels, Austen tells us,

'the greatest powers of the mind are displayed, in which the most thorough knowledge of human nature, the happiest delineation of its varieties, the liveliest effusions of wit and humour, are conveyed to the world in the best chosen language.' (Northanger Abbey)

But as writers, we also read Jane Austen to try to figure out how it's done - the memorable characters, convincing dialogue, tension, pacing, the lot. Despite Virginia Woolf's assertion that 'of all great writers, (Austen) is the most difficult to catch in the act of greatness', we spent a profitable week examining Northanger Abbey - blueprint for aspiring novelists - for clues, and they're all there. Now it's just a matter of putting them into practice...

A couple of points of interest:

In Austen, 'he said' can become 'he cried', whereas in contemporary writing circles the belief is that the plainer the identifier, the better. Austen also uses -ly adverbs: 'he said gravely', 'she said doubtingly'. Personally, I love variety in identifiers, and -ly adverbs too - I was reared on a diet of Enid Blyton, after all ('Timmy barked dolefully') - and feel greatly curtailed when advised to drop 'he murmured, murmuringly'.

And another workshop favourite, show don't tell, is quite disregarded by Austen, who has no qualms about telling, and even telling us that she is telling:

'It is now expedient to give some description of Mrs Allen... She had neither beauty, genius, accomplishment, not manner.'

Telling not showing, and a lesson in economy to boot. 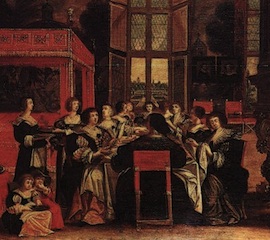 Fresh faces and voices are milling about the small city that is University College Dublin this Freshers' Week, and I am fortunate enough to be among them as I begin my Master of Fine Arts in Creative Writing. Whether writing can be taught has been much debated ever since the first Iowa Writers' Workshop was established in 1936. My position on the matter is obvious, but I can't resist listing just a few MFA-ers in support: Ethan Canin, John Boyne, Kazuo Ishiguro, Ian McEwan, Paul Murray, Raymond Carver...

Plenty can be taught, and learned, about writing, but the MFA is about more than just the dissemination of information. As Richard Bausch put it, the MFA is a modern version of the Salon, a place for writers to come together and discuss what matters to them: structuring their novel, finding an agent, finding the time, putting a comma in here[,] [  ]or not. It is part-academy, part-therapy, part-communion. Writing is, after all, a solitary occupation, and an MA or MFA provides support, feedback and encouragement.

Yesterday I met the interesting-seeming people who will be my peers for the next two years, along with stellar teachers James Ryan, Eílis Ní Dhuibhne and Frank McGuinness. At one point there was a conversation about Edna O'Brien and her forthcoming memoir, and since I'm a big Edna fan, even wrote a thesis about her in the past, it was thrilling to realise that some of those present are personally acquainted with her. A glimpse of what it means to be immersed in the world of writing only one day in, and it feels like pure indulgence.
View ReView Unknown at 12:28 No comments:

Richard Bausch's Short Story workshop at the Dun Laoghaire Mountains To Sea festival was not the kind where participants work feverishly on exercises, wondering anxiously if they will have to read  their on-the-spot compositions aloud. Instead, the amiable Bausch perched on a stool in the midst of the café, ordered a bottle of red for the tables, and began to talk. Two hours later he was repairing with a good percentage of attendees to a nearby hostelry because he didn't want to stop, he was having fun.

As were we. He regaled us with anecdotes about writers and writing, and his own writer's life. He gave advice as succinct as 'strive to be clear', and that 'everything in the story has to contribute to the story'. He explained that the transition from the first dream-like draft through the subsequent drafts, where conscious invention becomes involved, is a process of learning what our story is about, or uncovering the truth in our fiction.

But perhaps even more valuable was his generous encouragement to us as writers, telling us that our doubts 'are the thing itself', the talent, and to 'get stubborn'. He recommended that we find ourselves a literary salon, in whatever its contemporary form - MFA programmes, for example - for the peer support that writers need and have always sought.

As the short two hours drew to a close, he shared his father's words, 'Everybody, one at a time', surely a lesson in compassion that no writer can be without.

The demand for the workshop was so high that Richard will give another tonight.