John Boyne and David Mitchell at Mountains to Sea 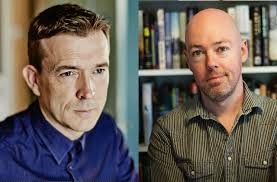 Friday night's Mountains to Sea event in the Pavillion Theatre in Dun Laoghaire with John Boyne and David Mitchell entertained a full house, with good banter between the two writers and Edel Coffey, the interviewer. They read from their respective books, and riffed on whatever topic

Boyne talked about his reasons for naming his old school in his book and was
unrepentant about it, having suffered beatings at the hands of priests there in his schooldays. His new book, A History of Loneliness, sounds well worth a read. 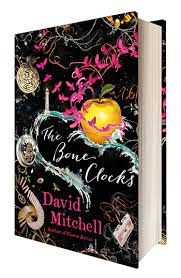 Mitchell read a letter from Bone Clocks, which was doubly intriguing because I'm halfway through the book (and enjoying it). He denied being so Irish now that he felt he'd had to write a novel about Ireland, but admitted that he was able to do 'expat living in Ireland' or second generation Irish. Maybe he just needs a few more years...

The highlight, though, had to be when Mitchell, responding to an audience question, said he'd see the young lady (whose question it was) later, and would introduce her to "excalibur"... You had to be there!
View ReView Unknown at 00:45