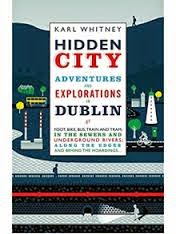 Or, to give Karl Whitney's book it's full title: Hidden City: Adventures and Explorations in Dublin by Foot, Bike, Bus, Train and Tram; In the Sewers and Underground Rivers; Along the Edges and Behind the Hoardings...  As promised to @hmckervey, this is the first of a few short reviews of books I've been reading lately. (It should probably be in Goodreads, not here, but somehow I've never managed to make the time to figure out how or why to use that site. Should I find time? Is it worth it?)

The concept itself is what first recommends the book to me, closely followed by 'dammit, why didn't I think of that'. Whitney moves around Dublin by foot, bike... well, you know the rest, and describes what he sees in clear, unprejudiced prose. Yet, because this is psychogeographical writing at its best -- yes, I stole this term from the flyleaf, and later, from Whitney's book when he references the Situationists, an avant-garde group set in 1950's Paris (where else) -- there is a very personal layer to the essays. Thus, when Whitney explores the fringes of West Dublin, he describes his own family's move there, and the effect the moves had on him. And because his is highly structured and intelligent writing, this move is echoed by the later chapter on Joyce and his family's many moves. You can follow Whitney down Dublin's drains in an excerpt from book, printed in last Saturday's Irish Times. You too might find it completely compelling.

PS For the sequel, I'd recommend taking along that smartphone, and a nutritious packed lunch. It's the Mammy in me -- we worry!