Nuala Ní Chonchúir and Mike McCormack at the DWF 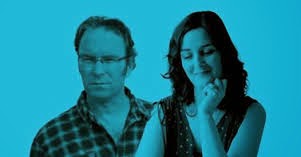 Nuala Ní Chonchúir and Mike McCormack took to the stage on Thursday lunchtime for the Art of the Short Story event, ably facilitated by Thomas Morris of the Stinging Fly. He began by introducing the two authors: Nuala, he said, writes 'truths that are rarely spoken' (evoking Robert Olen Butler), while Mike writes black humour and arresting dialogue, deepening into core sadness.

As both authors write short stories as well as novels, he asked about the differences between the two (an area dear to this blogger's heart, as I am currently working on a paper exploring genre, and genre slippage, as in the novel-in-stories).

Nuala approached the question first as a reader, saying that the pleasures are different, that there is resistance to short stories from readers, and that the novel is perceived as the highest form. For her, there is a different 'hit' or feeling, and it is not just about time. The short story, she reminded us, is designed to be read in one sitting. She felt that the reader needed to be trained in the art of reading short stories, and that perhaps this could be achieved by making them more available, for example, as Kindle singles.

As a writer, she says the novel is something you can come back to every day, and that is a great comfort, whereas with short stories, you're constantly starting anew. There is always the fear that you will never write another.

For Mike, the short story holds out the promise that you might possibly get it right, whereas the novelist is condemned to getting it wrong. But, if the novel is created in a quarry, with a lump hammer, the short story is keyhole surgery. It is a much more exacting guest. There is more pressure. It demands your attentiveness. The novel is expansive, generous, openhearted: we are people among people, whereas with the short story, 'you're only codding yourself; we're on our own.'

What if you're not getting it right, Morris wondered. Are there stories you've given up on?
Mike admitted to chiselling away and polishing a story for 18 months, and that sometimes he just doesn't know if he's getting it right. Nuala said that if a story is rejected she will work on it until it finds a home, and that some are constantly rejected until they end up in a book.

On openings: Mike tries to sound a note that will reverberate. He added that a story might survive a bad opening, but it won't survive a bad ending. He admitted that he sees journals and competitions as 'part of the drafting process; the real arguments are when you're putting a book together.'

On endings: Nuala says she has no need for resolution, but that endings are crucial in the short story. She quoted Elizabeth Gilbert who said that the ending 'should bend over backwards and kiss the beginning.' The reader should be 'holding their breath from start to end.' She remarked that with short shorts, or flash, she likes crisp, arresting openings, and decisive endings which make sense.

Neither author plots. Morris wanted to know if it is difficult to trust that. For Nuala, it's the joy and excitement of writing; she might not write it if she knew where it was going; she might bore herself.
Mike starts with an image, a man and a place, for example, and dialogue gathers around it. 'It serves me well.'

Advice to writers?
Nuala: 'Just write. And do years of that. And read.' 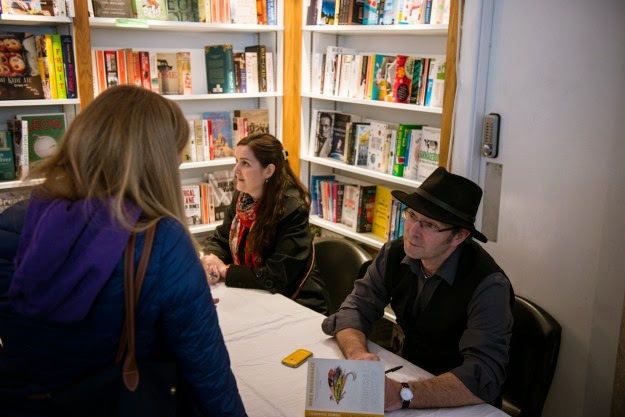 On the question of reading one's peers, Morris asked if there was a lack of variety. Mike feels that 'our reputation is bloated,' that we use the nineteenth century Joyce/Chekhov template — linear, single-voiced, past tense, gathering towards epiphany —and we have not developed it, as borne out by the two big collections, Granta and Oxford. He says we have one true genius of the short story since Joyce, rarely acknowledged, and that is Beckett. 'The Irish short story is skewed and misrepresented by his absence.' He wonders why this happened. Before Joyce and Moore, we had the Goths, 'pale, worried Protestants, going to Trinity College,' writing about ghosts and vampires. Beckett, he claims, is a 'reconstituted Goth.'

Nuala notes that there are people pushing against the nineteenth century model, and she mentions Ryan O' Neill, Cathy Sweeney, Dave Lordan, and June Caldwell.

Much food for thought, but too short, as dictated by its lunchtime slot.