Lia Mills and John Kelly: Writers On Top Of Their Game

I've been neglecting my blog. I have many excuses, not least that I've been posting on the Dublin Writers Festival blog.

The Festival kicked off on Saturday with the Lia Mills / John Kelly event. 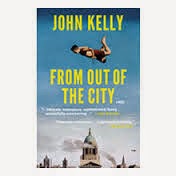 Which I blogged.
Which was 'pending'.
Which has disappeared into internet ether.

Sob! It was good!

What follows is a poor reproduction:

Mick Heaney described Mills and Kelly as writers 'on top of their game'. Kelly is a madly imaginative and entertaining author; Mills has the gift of a keen eye, and the beautifully rendered sentence. [I've had first hand experience of Lia's keen eye as she is supervising my MFA thesis/novel-in-stories — always kindly, always meticulously.]

Where did the impulse for the novel come from?

Kelly, knew he couldn't write another pastoral novel about Ireland, he couldn't write the farm novel, so 'white-knuckled' he wrote 'something they're not going to like' (From out of the city). He wanted 'to discombobulate himself, and the reader. [He succeeds. It's a great read, it shows what is possible, it pushes the reader out of their comfort zone.]

Mills, whose mother lived 'over the shop' in Parnell Street during the 1916 Rising, wanted to explore what it is like when your own city blows up around you. Fallen was an act of restitution.

It's been a while for both writers since their last novel. Heaney asked if it was difficult to get back up on the horse.
Mills' was a long process. Books get written 'a word at a time' (and then there are the interventions; Heaney drew attention to the Acknowledgements in Fallen, where Anne Enright is credited for saving Fallen from the shredder, not once, but twice!) 'I'm slow,' she admitted.
Kelly talked about how extraordinarily hard it is to write a novel. Stamina is needed, especially when one is 'writing with little hope of getting published. Writing into a black hole of nothingness, wondering why.'
You don't sleep either, both writers agreed.

On writing memoir:
Kelly referred to his as 'think pieces', written when he was in his early twenties. Mills said it was easier (than writing fiction) because you didn't have to make anything up. Memoir is all about editing, 'taking out the 'poor me' and libellous things.' She added that you have to be careful about not writing other people's lives.

On being a writer: Richard Ford's 'don't have children' mantra was evoked, echoing Cyril Connolly's infamous 'pram in the hall'. Kelly observed that artists can tend to leave a 'trail of casualties'. Mills agreed, saying that 'you are torn all the time.' She mused that it can't be easy living with a writer.

On their previous books:
Kelly felt his were not as good as they could have been, and said that with From out of the city he 'started all over again.'
Everything you write teaches you something, Mills said, that it is the classic dilemma of the artist 'it is never quite what I thought it was going to be.'

An audience member asked if they had any advice for would-be authors, and they agreed that one should read. Read stuff one wouldn't usually read. Read Paris Review author interviews. Heaney concluded that a good place to start would be to read Lia's and John's books.


Next up for me in the Dublin Writers Festival, hot on the heels of Mills/Kelly, barely giving me time to buy my books and say a few hellos in The Gutter Bookshop, came Writing for Games.