I recently had the dubious honour of winning a punning comp via twitter, but what's pride when the prize is Tim Parks' Italian Ways, On And Off The Rails From Milan To Palermo ('Nearly had something witty but I lost my train of thought'. Knew you'd want to know). Just leafing through the first few pages was enough to send me on tangents of Italian ways and days of my own.

Like Parks, my first introduction was courtesy of an Interrail card, which took me from Venice to Florence to Rome in about three days flat. My photos from the time include one where I've just bought a Wham-style bat-wing soft leather jacket from a stall and I am very pleased with myself. My favourite memory is of sitting on the Spanish Steps, with Babbington's Tea Rooms to my right, and the room where Keats died to my left. I pined (in my way, lapping a pistachio gelato, my first pistachio, my first gelato) for the young, dying poet. I was a bit jealous, to be honest. I suspected then, and it has indeed come to pass, that I would not be mourned for my dead young genius. 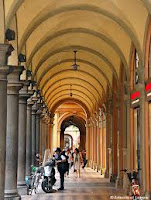 I'm a bit of an expert in gelato now, and I can order uno cappuccio with the best of them. I've made several trips to Bologna, with its famous red roofs, university, and novelist, Umberto Eco. I agreed to travel by scooter with a handsome boy to an all-night disco in the hills on the half-promised that he would introduce me to Eco (he didn't). Mostly, though, I wandered around the streets under the porticos imagining that I could live there, that I was as entitled to the ochres and the umbers and the endless sunshine as the next person.

A much later trip, a family holiday, found me in Umbria, in a perfect Italian village with winding, cobbled streets. Many years later, San Donato would provide the inspiration for my novel, Michaelangelos, in which my elderly protagonist Selina struggles with the immigrant plight of being both Irish and Italian, living in Dublin but missing Italy. It turns out that most of Ireland's Italian 'chipper' community hails from a nearby village, Cassalatico. I knew none of this then, as we wrestled with 40 degree temperatures and apartments without air conditioning. In the end we cut the holiday short by a week — a sacrilege. My favourite memory is of my father ordering coffee. Espresso was fine, he insisted. We warned that it was very strong, and that he might prefer a cappuccino. When it arrived he decided it needed a drop of hot water. The cafe owner brought some in a jug. Then a drop of milk. The owner brought steamed milk. The coffee was just right. 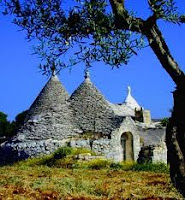 My last trip was too long ago, about seven years. I went with my sister to view Trulli For Sale. These are curious, conical-roofed little houses that look like they house elves. I liked the circular rooms and their isolated locations. We would live on olives and grapes and the walnuts the locals (us!) gathered in fine nets on the ground around the trees. Maybe this trip coincided with a certain stage of life… 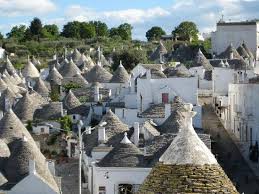 It rained that trip. Torrents of rain streamed down the windscreen as we tried to navigate our way into the town of Lecce in our rented car in the dark, only to discover, eventually, that the centre is car-free, and we were restricted to park in the perimeter only. Cue dragging suitcases through puddles and soggy map-reading. But the hotel was lovely, right in the centre, and the dinner and wine incomparable.

When we met our estate agent the next day, in a restaurant as he had suggested, we began our acquaintance in a most civilised manner, with glasses of pinot grigio which arrived with  condensation dripping off the ice-cold glasses. It was a good start. After a leisurely chat, and some olives may have been consumed, he drove us all around Puglia to view trullis. Some were pristine to the last stone, but most were fixer-uppers, abandoned and falling down in the corner of a rocky field, for all the world like the famine cottages in the West of Ireland. There was something poignant about them. As we poked about in their ruins, imagining how families lived in the small rooms, I realised I would never buy one of these houses, and that I most likely would never live in Italy. I didn't know the people whose graves it felt like I was walking on, I didn't know their language beyond a few lessons, and the small foray I'd made into the house sale process showed me that I didn't understand the bureaucracy, the system, and most likely never would. Italy was for visiting, for having an affair with, not for marrying.

Tim Parks, however, decided to commit, and has lived there for some thirty years now. More on this in the next post.