Yesterday, I bumped into the poet, Brendan Kennelly, who was also one of my old college teachers; a little bit of synchronicity since only the day before I was remembering (ably assisted by google. Is there a hybrid word for that kind of remembering?) one of his poems, I See You Dancing Father. 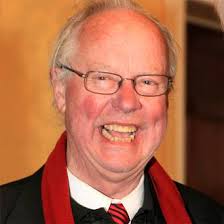 Over latter years I've passed him often in my to-ings and fro-ings through Trinity College and he never fails to greet me with his famous smile, even though I am one of thousands of his past students. I was lucky enough to participate in one of his creative writing classes - rare as hen's teeth in those days - but, alas, they were completely wasted on me. As much as I wanted it, whatever 'it' was, the penny hadn't yet dropped. I had nothing to say, or I was trying to write poetry when I should have been trying to write prose, or... something.

But all was not lost because, unbeknownst to me at the time, it was in his Irish Poetry lectures that I learned to tune my ear to the music of language. Through the recitations which I remember as making up a good part of the lectures, I began to understand the importance of sound, the rhythm and balance of sentences. What I did know then was that I could have listened to Brendan reading his poems with his Kerry accent forever. Have a listen and hear for yourself.

I'm not sure why I didn't tell him any of this when we met. Maybe I only figured it out after we parted. Instead we talked about my novel. Now, as anyone out there who writes knows, though folks may ask about your work-in-progress, may believe themselves to be genuinely interested, as soon as you begin to explain their minds begin to drift. You can see it in their eyes, a sort of deadening. Not so Brendan Kennelly. His listening was as lively as his talk, and he made spot on observations and comments.

He had plenty to say himself too. We talked about operations and childbirth and surgeons made of rain, missing letters and reviews, 'Seamus' (Heaney), early collections, early rising. A recitation especially for me, an audience of one. When I asked what he was working on he said he was 'scribbling away'.

It was an honour and a privilege to sit and chat with him, and it made my day.