This is my summer of Proust. Long overdue, 100 years to be precise, In Search of Lost Time has been on my 'must read' list forever. I have not approached a book with such apprehension since Ulysses when I was 18. And now that I've started the first volume, By The Way of Swann's, it's still taking me forever. Not in a bad way. It's just that every few pages, sometimes every few lines, something in Proust's meandering reverie triggers one of my own and I find myself staring off into space, my mind gone somewhere else, which of course means having to reread in order to find my place when I come back to the book again. A part of me, the one-time lit crit student, perhaps, is telling me I should be making steady, diligent progress; there are seven volumes, after all... But I've decided to listen to the other part, the writer-part, and it's telling me to follow Proust's lead, to take the slower, more scenic route in order to better savour the language and images, and to allow for diversions along the way. The summer of Proust has become the summer of making time for Proust.

So, I've reached the end of part one. Anyone who writes will recognise the moment the desire to write and the inspiration come together in the form of words for the first time, but few have expressed it as eloquently as Proust does here. The young Proust is sure that he wants to be a writer one day, but worried that he may not find a philosophical subject on which to write. Then, while taking a lift in Doctor Percepied's carriage something shifts: 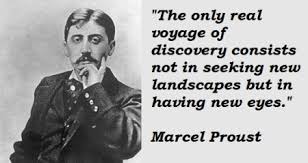 'At the bend of a road I suddenly experienced that special pleasure which was unlike any other, when I saw the two steeples of Martinville, shining in the setting sun and appearing to change position with the motion of our carriage and the windings of the road...
As I observed, as I noted the shape of their spires, the shifting of their lines, the sunlight on their surfaces, I felt that I was not reaching the full depth of my impression, that something was behind that motion, that brightness, something which they seemed at once to contain and conceal.'

The carriage sets off again after a short stop and:

'I was obliged...to fall back on my own and try to recall my steeples. Soon their lines and their sunlit surfaces split apart, as if they were a sort of bark, a little of what was hidden from me inside them appeared to me, I had a thought which had not existed a moment before, which took shape in words in my head, and the pleasure I had just recently experienced at the sight of them was so increased by this that, seized by a sort of drunkenness, I could no longer think of anything else.'

He writes the words down on a scrap of paper.
'...I was so happy, I felt it had so perfectly relieved me of those steeples and what they had been hiding behind them...'

I think this is what many of us mean when we say it's not that we like writing, rather, we like having written.

As it turns out, I'm not alone in coming late to Proust. Someone suggested thinking about the seven volumes as just another Harry Potter; that gives me about 10 years then, so no rush! My apprehension has been steadily lessening since I started reading, and it's been interesting and a help to read the thoughts of others embarking on the same project:
Surrender to Proust
Amateur Proust
View ReView Unknown at 01:38