A Few Thoughts On Transitions 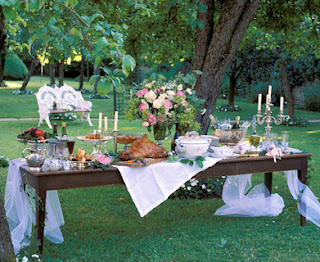 Changes of time, and changes of place; how do we get from A to B in fiction? In the beginning, we wonder whether to fill in all the bits that take the character or narrative from one time or place to another. 'And then... and then... and then...' is one solution, familiar to primary school teachers. A better strategy might be to consider how it's done by those who know what they're doing.

In Katherine Mansfield's The Garden Party (with thanks to David Huddle's 'The Writing Habit: Essays)

While Laura is wondering, the workers have moved (from A to B) to begin setting up the marquee. Mansfield has made the transition and we hardly see how she did it, while she simultaneously makes her technique work on another level: we are left to wonder whose voice is saying “They must.” The answer is Laura, the young teenage character, and an outside narrator.

We see Mansfield's system of instant transportation in the next example:


whereas earlier we watch Laura leave the workmen to take a phonecall:

'Away she skimmed, over the lawn, up the path, up the steps, across the verandah, and into the porch. In the hall...'


Both transitions work. It is Mansfield's sure sense of timing which makes it possible to choose between the gradual transition of the latter example and the instant of the former.

Joyce, in Eveline, uses repetition of the word 'home'. We are in Eveline's consciousness and, as in our own consciousnesses one word or image or idea leads to another. Word association effects a seamless transition between paragraphs:

'Everything changes. Now she was going to go away like the others, to leave her home.
(New Para) Home! She looked round the room, reviewing all its familiar objects which she had dusted once a week for so many years...'


Alice Munro's trademark transition technique is to leave a blank line, then to jump straight in. She expects her reader to be prepared to work a little.

'In the summer of 1979... making himself a ketchup sandwich.
(New Para)I have driven around in the hills northeast of Toronto, with my husband- my  second husband, not the one I had left behind that summer....
(Blank line)
In the coutryside where I lived as a child, wells would go dry in the summer.' (Nettles)


Sudden shift or smooth segue? I think in part we make our transition decisions based on how much confidence we have in our reader. Too little, and we get a lot of tedious detail, extraneous to the story; too much and we risk confusing the reader, and jarring the narrative. What does anyone else think?
View ReView Unknown at 04:14